According to a study published in the Nature Journal of Exposure Science and Environmental Epidemiology, avoiding BPA containers and personal products that contain phthalates might not be enough to protect people against toxic levels of BPA and phthalates. Both bisphenol A (BPA) and phthalates are hormone-disruptive chemicals that are widely spread in environment.Â  Previous studies have linked phthalates to infertility in men and BPA to neurological problems, cancer, obesity, hyperactivity, stress and diabetes.

This new study suggests that people still might be exposed to both BPA and phthalates and other chemicals even if they eat fresh organic foods that are not cooked or stored in BPA containers. 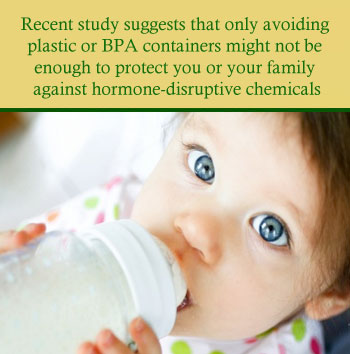 The study was performed by University of Washington School of Public Health and Seattle Children's Research Institute and it was conducted by Dr. Sheela Sathyanarayana who is assistant professor of pediatrics at UW school of Medicine.

The study was performed on 10 families in two groups of 5 for 5 days. The first group was only given instruction on how to reduce BPA & phthalates exposure where as the second group received locally grown organic food that wasnât cooked or prepared in plastic containers.

The leader of the study, Dr. Sheela Sathyanarayana explains how they were surprised with the results since they expected significant lower levels of BPA and phthalates in the group that consumed organic food. But instead the group had high levels of BPA and phthalates while kids even showed higher level of these chemicals. For example an average kid was exposed to 183 mg of contamination per kilos of their body weight, when the limit of EPA is only 20mg/kg/day. Dr. Sheela Sathyanarayana also suggested that chemical contamination in foods can cause higher concentration of contaminates that are considered safe by USDA and how itâs very difficult to control exposure to these chemicals.

She also pointed out that families should focus on buying organic fresh produce instead of canned or processed foods but that alone might not be enough to protect them against these hormone-disruptive chemicals. She also suggested that there might be a need for new Federal regulations to reduce the exposure of these chemicals in our food supply.