The forbidden truth about GMOs

The California Proposition No. 37 was defeated by the giant biotech companies who spent $46 million on lies and propaganda to hide GMOs in our food supply.

These pesticide companies are now fighting harder and harder to strengthen the position of GMOs in our food supply and disrespect the right of consumers to know whatâs in their food. 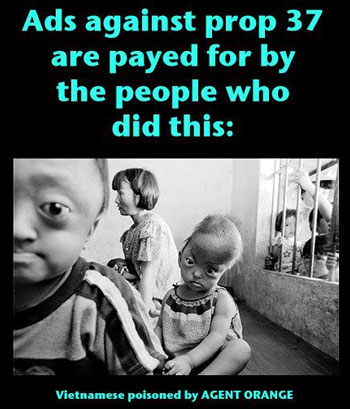 So far, these companies have been able to create lots of confusion and doubt about the GM crops and their side effects on our health and the environment. Here are the health and environmental risks associated with GMOs in our food supply based on independent resources and research:

Bt corn is the masterpiece of Monsanto introduced to market in mid 90s. The BT bacteria is sprayed on vegetables, corn or soy to kill pests. Here is a study in 2012 on how BT toxin kills humanâs cells.Â

Also another study in Canada showed how BT toxin has been found in the blood of 95% of women and their unborn fetuses.

In many cases children with severe allergies stopped showing any signs of allergies after they stopped consuming GMO foods. GMO foods also have been related to inflammation and irritation which are the same side effect we see in children with autism.

Infertility and depleting soil from its minerals and beneficial bacteria:

Based on few independent studies Monsantoâs Roundup ready soy has been related to infertility. In one study 50% babies of mother rat died after they were given GMO foods.

Ultrastructural Analysis of Tests from Mice

A glyphosate-based herbicide induces necrosis and apoptosis in mature rat testicular cells in vitro, and testosterone decrease at lower levels.

Roosevelt once said that the nation that destroys its soil destroys itself. The GM by products and chemicals such as Bt toxin deplete soil of its valuable minerals and beneficial bacteria. The active ingredient in Monsantoâs Roundup called âglyphosateâ is also non-biodegradable and adds to the environmental toxins.

Cancer, increase in use of pesticides and loss in US agriculture:

The increase in use of rBGH growth hormones and antibiotics in our meat and dairy products have been related to cancer.

Also despite the claims of the biotech that GM crops will reduce the need for herbicides, since the introduction of GM foods, the use of herbicides have increased by 527 million pounds. Â Â 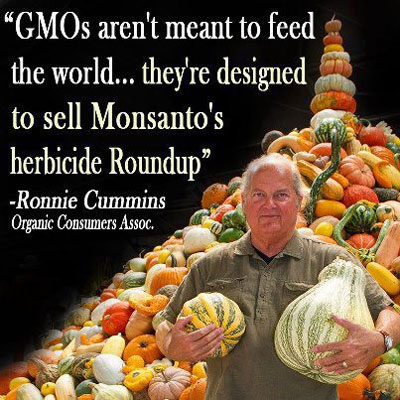 Increase in superweeds or superbugs, damaging native species and polluting the environment:

The use of chemicals like Monsantoâs Roundup has generated crop destroying superweeds and superbugs and a need for stronger pesticides.Â Â

loss of corn exports to Europe: Something to chew on at the Commodity Classic

GM crops can also easily contaminate non-GMO crops and other plants. In fact, FDAâs approval of GMO alfalfa could mean an end to organic sustainable agriculture as we know, since alfalfa is pollinated by insects. GMOs are also a threat to survivals of bees, butterflies, bats and other pollinators.Â

Also few independent studies show that Bt bacteria can be found in hundreds of water ways, groundwater sources and steam ways in America.Â

END_OF_DOCUMENT_TOKEN_TO_BE_REPLACED

In India every 30 minutes a farmer commits suicide because of devastating results of Monsantoâs GMO crops. The costly seeds and the increase in use of stronger pesticides leaves farmers with no choice but to end their lives by drinking the insecticide that was shipped to them by Monsanto.

On Indiaâs Farms, a Plague of Suicide